Respect for teens in the Workplace | Teen Ink

Respect for teens in the Workplace

Are you aware that the amount of teens in the workforce peaked 42 years ago and has been declining ever since? Back in 1979, almost 60% of American teenagers were employed. Today, over one-third or 35% of teens between ages 16 and 19 are among those who are working (Dickler). That’s a large gap! This steady decline may have come from the rise of other challenges like difficult education and teens being constantly under pressure. We as teens deserve more respect in the workplace and while we can do hard things, we can’t do it all because of intense school life, forms of harassment, and perceived laziness.

First of all, our intense education is mentally and academically hard to face day by day. The article, “Why so few teenagers have jobs anymore” by Jessica Dickler, outlines teenage struggles. “‘We have increasing demands on what it is that high schoolers need to be doing and how much time that takes,’ she said, including ‘not only homework and course requirements but other graduation requirements like public service.’ ‘High school has become more intense,’ said Lauren Bauer, a co-author of the study’” (Dickler). This goes to say that all the things teens do in school is pressuring and physically draining. Teens upholding jobs, school, and extracurricular activities all at once is simply too much.

Another point to why fewer teens are working is also said in this article, “The research also shows that prioritizing education over early work experience can increase the prospects for good job outcomes later in life”(Dickler). This basically states that choosing to focus on school helps for a better future rather than trying to balance both and end up burning yourself out. So how does this say teens deserve more respect in the workforce? It shows that teens are working hard in school like adults are at work. Teenagers not only do this but uphold plenty of other trials, such as dealing with peer pressure, overexposure to the internet and social media, depression, and feeling accepted. And since adults are well respected in their jobs, teenagers should be as well.

Secondly, sexual harassment and harassment of any other form have negative impact on our overall health as teenagers. Michael Blickman, partner and chair of labor and employment at law firm Ice Miller in Indianapolis appears in the news article, “Teen workers fight sexual harassment” by Associated Press. “‘Younger employees are definitely more vulnerable to sexual harassment,’ he said. ‘Because they have less experience in the workplace, they tend not to know their rights'”(Associated Press). This means that this happens to youth workers frequently and when it does it messes with them emotionally. Depression, anxiety, post-traumatic stress disorder, and lack of trust are all effects of having gone through sexual harassment. Any type of harassment is disrespectful. This relates back to why teens deserve more respect and kindness in the workplace.

Another element Blickman explains in this article is, “‘An employer that fails to take action sends a message, not just to the victim, but to every one of its employees that this kind of conduct is acceptable,’ he said. ‘Not only is failing to act the wrong response, but it actually creates more risk for an employer '”(Associated Press). This states that doing nothing about it only makes the situation worse. Choosing not to help and uphold that teen’s rights or with any employee causes the victim to feel helpless and can even change them. In today’s world, hoping that people come to their senses to try stopping this harassment is wishful thinking. Moreover, less sexual harassment would increase the level of respect and well being for teens in the working environment.

An additional key part to this found in “Why so few teenagers have jobs anymore” by Jessica Dickler is, “‘Yet kids today are not slacking off; they are working harder in school and have less free time than teenagers had in the past’…‘In fact, the popular conception that kids are spending more time on leisure or screen time is just not the case, ’ Bauer said. ‘Teenagers are working really hard’”(Dickler). In turn, both pieces of evidence show that this is the response to doing too much, being too busy, taking no breaks between work and school, and being too stressed out. It’s bad enough that we as teens deal with the crushing expectations of modern society while being surrounded by millions of other distractions. Even though life today is ‘easier’ because of access to more things and technology, there are still plenty of challenges such as having enough money for college.

When teenagers are stereotyped as lazy, part of it is on whoever is stereotyping because they don’t see how much effort teens put into their jobs, in school, and when they collaborate to help others. We as teens want to be seen as full of potential but want to be understood that we can’t be expected to give it our all 24/7.

In conclusion, teens need to be more respected in the workplace and recognised that they can’t do everything the world expects of them because of intense education, forms of harassment, and perceived laziness, but can still manage to do hard things. It’s so important that we as teens fight for our needs and are being taken seriously. By discussing these topics openly, we can find even ground and stand up for the well being of teenagers in our community. 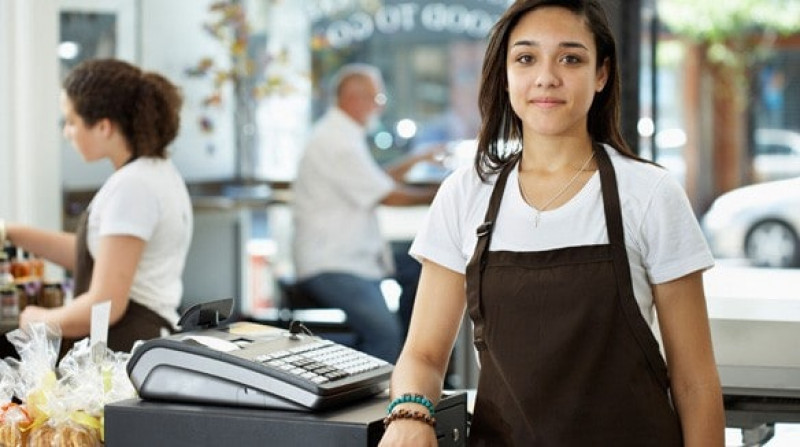 Teens need to be seen that we can do hard things, but we can't always do it all.